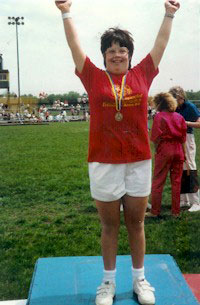 UPS for DownS established the Katie MacDonald Literacy Project to honor Katie and to promote literacy among individuals of all ages who have Down syndrome. 100% of the funds raised by the Marathon team honor Katie’s memory and support her legacy of literacy through activities that include:
Katie was born in 1973 at a time when attitudes about people with disabilities were beginning to change. Her mom says, "We took her home from the hospital and tried to treat her like we would any child. We were fortunate that she had a great interest in books and began reading at an early age. Her love of reading opened many doors for her. Reading increased her knowledge on many topics and certainly increased her vocabulary. That, in turn, improved her ability to speak and converse on a variety of issues.

As a result, she gained great self-confidence and excelled in presenting herself to others. She made numerous speaking engagements in front of large groups as well as appearing in videos and on television. People recognized her extraordinary success and she empowered others to try harder. For parents of individuals with Down syndrome, she offered hope."

So, why the Katie MacDonald Down Syndrome Literacy Project? Katie was most proud of her ability to read. She read to learn; she read for enjoyment. She proved to many doubters that people with Down syndrome can read and benefit from it. After Katie died unexpectedly in 2002, UPS for DownS approached Katie’s mother with a desire to honor her memory. Out of Katie’s love of reading and with her mother’s encouragement, the Katie MacDonald Down Syndrome Literacy Project was created.

The UPS for DownS Katie MacDonald Marathon Team was the inspiration of Team Captain, Jim Uggla. Jim and Katie met through Special Olympics many years ago and became friends and supporters of one another. Jim told Katie to run into his arms at the finish line of her Special Olympics race, and that day she “ran into his heart forever”. When Jim broke his back nearly twenty years ago, Katie was instrumental in helping him recuperate, train, and finally complete the Honolulu Marathon two years later. Katie was waiting with open arms for Jim at the finish line.

Jim later retired from marathon running. However, at Katie’s memorial service, Jim promised Katie he would run one more marathon in her honor. That marathon was the 2005 Chicago Marathon. Jim led the UPS for DownS Marathon Team on the “Angel Run” in honor of his angel, Katie.

With Jim Uggla as the team captain, the UPS for DownS Running Team has expanded into the Angel Endurance Team and includes the Rock ‘n’ Roll Chicago Half Marathon, Bank of America Chicago Marathon and a cadre of triathletes competing to honor the memory of this amazing young woman. We all know that Katie will be with us every step of the way!!!!